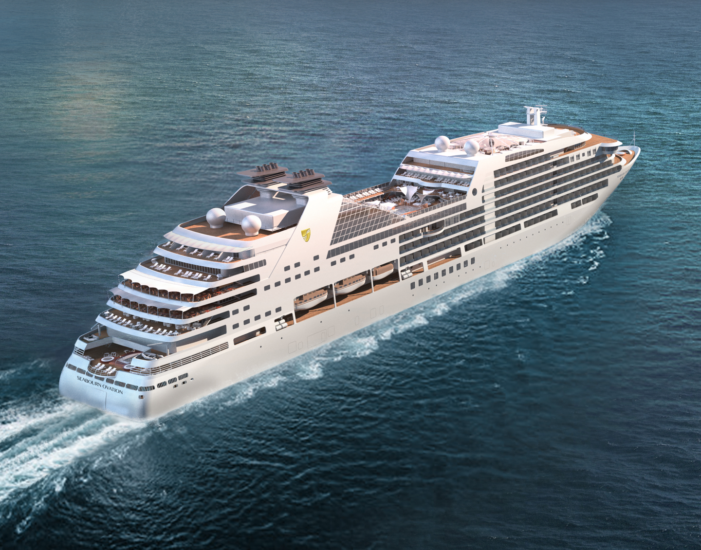 Seabourn’s newest ultra-luxury vessel, Seabourn Ovation, achieved another important maritime milestone with the completion of its final round of sea trials in the Mediterranean off the coast of Italy.

Seabourn Ovation departed the Fincantieri shipyard on March 14 for four days at sea, where a team of officers and engineers tested the ship’s technical and mechanical systems. Seabourn Ovation returned to the shipyard in Genoa on March 18, and staff and workers are putting the final touches on the ship. The delivery ceremony of the ship is on schedule to take place on April 27, 2018.

“We’re now weeks away from delivery, and I’m very pleased with the progress and preparedness of the ship now that sea trials are complete,” said Richard Meadows, president of Seabourn. “Our first revenue guests will board on May 5, and I know they will be excited to see this newest addition to the Seabourn fleet.”

Seabourn Ovation will begin her maiden season with an 11-day inaugural voyage departing May 5, 2018, from Venice, Italy, to Barcelona, Spain. The ship’s naming ceremony will take place on Friday, May 11, in the beautiful baroque harbour of Valletta, Malta. One of the world’s highly-acclaimed actresses and singers, Elaine Paige, will serve as godmother and will name the ship during a spectacular ceremony that will light up the dramatic UNESCO World Heritage site and the 2018 European Capital of Culture.

The ship will spend the majority of its maiden season cruising the waters of Northern Europe, offering a series of seven-day Baltic and Scandinavian sailings between Copenhagen and Stockholm, which will include the line’s signature three-day stay in St. Petersburg, Russia. Seabourn Ovation will also sail on longer 14-day voyages, visiting the majestic Norwegian fjords and British Isles.

Seabourn Ovation is the fifth ultra-luxury ship in the Seabourn fleet. With stunning contemporary interiors by design icon Adam D. Tihany, culinary expertise by Michelin-starred chef Thomas Keller, specially commissioned entertainment by Sir Tim Rice and an exciting program of onboard speakers, Ovation will sail on a variety of voyages in and around Europe between May and November 2018, hailing at ports throughout Northern Europe and the Mediterranean.

Seabourn Ovation will expand and build on the line’s award-winning and highly acclaimed Odyssey-class ships, which revolutionized ultra-luxury cruising with enhanced accommodations and innovative amenities when they were introduced between 2009 and 2011. A sister ship to Seabourn Encore, Seabourn Ovation will feature 300 suites and maintain the line’s high ratio of space per guest, enabling highly personalized service.