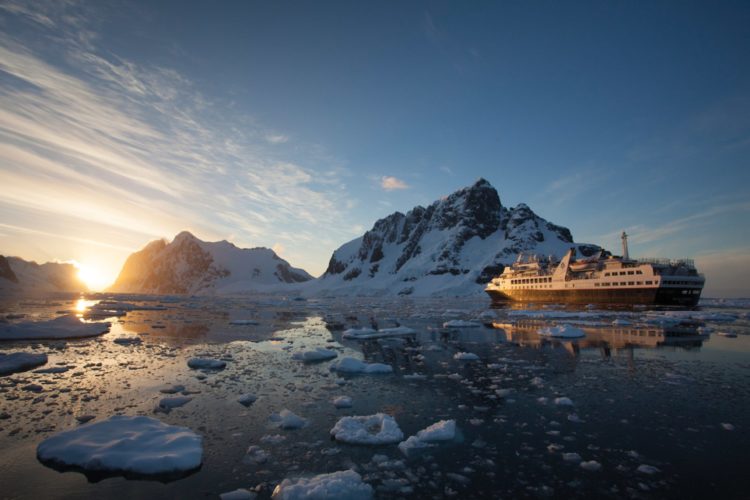 In 2019 Silver Explorer will start the year in the ultimate expedition cruising destination, Antarctica. She will offer longer voyages that in addition to the peninsula, will also visit Falkland Islands and South Georgia. Longer voyages to Antarctica give a fantastic opportunity to encounter various wildlife species that are not seen in the peninsula, and there is also an emphasis on exploration history – we visit Grytviken, the last resting place of an epic polar explorer Sir Ernest Shackleton and learn about the incredible courage and perseverance of early explorers of the continent.

Towards the end of the Antarctic season, Silver Explorer will head to South America, offering a voyage along the Chilean Fjords. Majestic glaciers, fjords, Torres del Paine National Park, various species of marine mammals as well as birds will be some of the highlights of this trip.

At the beginning of March, Silver Explorer will turn westwards into the Pacific Ocean and will offer couple of fantastic voyages visiting such destinations as Robinson Crusoe, Easter, Pitcairn Islands.

The focus here will be fascinating and often surprising human history – guests will have opportunities to learn how Mas a Tierra island became Robinson Crusoe’s island, why the famous Easter Island heads were erected, and meet the direct descendants of the famous MS Bounty mutineers. These islands are also home to various endemic wildlife species and Bora Bora island group offers some epic snorkeling in its pristine, sapphire-blue waters.

14 days voyage from Papeete to Lautoka will take our guests to Cook Islands and Fiji – here, various water activities in rich waters of the region will steal the show, as well as meeting incredibly welcoming Polynesian and Melanesian people.

While I shouldn’t have a favorite, if I had to choose just one voyage in South Pacific, Silver Explorer’s trip from Lautoka to Apra would be the one.

This voyage offers a dizzying array of some phenomenal highlights: witnessing the original bungee jumpers in Pentecost Island and ‘Rom’ dance in Ambrym, snorkeling in Njari island with its highest concentration of tropic fish and coral species, observing mesmerizing fire dance by Baining people in Rabaul, and finishing the trip by a rare visit to some minuscular islands of Federated States of Micronesia.

In May, Silver Explorer will offer two voyages to Japan. Expedition cruising offers a perfect platform to explore less visited, but nonetheless fascinating parts of Southern Japan with its beautiful gardens, ancient castles and traditional temples.

For those who seek true wilderness, there is no better place to explore than Russian Far East and Alaska.

Both Okhotsk and Bering seas are rich of nutrients and attract a number of whale species, not to mention Northern Fur Seals, Stellar Sea lions, and numerous sea birds that come to Kuril and Aleutian islands to nest. Brown bears can be spotted in mainland Kamchatka and Alaska.

Silver Explorer will offer various itineraries in Russian Far East from June to late July before heading to the Arctic on an epic voyage that in addition to Svalbard will also visit Greenland’s Scoresby Sund, one of the largest fjord systems in the world.

Towards the end of September, Silver Explorer will offer a voyage to Greenland and Canada, enabling our guests to learn about the Inuit culture, admire glaciers, fjords, and icebergs, and potentially encounter various marine mammal species.

One of the biggest highlights however of 2019 Silver Explorer’s itineraries is the North East Passage. While there were several attempts to find a route leading from the Pacific to the Atlantic over the top of Russia, it was only in 1878 that Northeast passage was successfully completed by Finnish-Swedish explorer Adolf Erik Nordenskjold. Silver Explorer guests will have an opportunity to retrace this epic journey in 25 days leaving from Nome in Alaska and arriving to Tromso in Norway. En route, we will visit Wrangel Island, one of the best places to encounter polar bears– in fact, one of the expedition vessels that visited this island this September, saw over 150 polar bears in one single afternoon.

Other wildlife species we are hoping to see are walrus, various species of sea birds, seals, whales, reindeer, to mention a few. Meeting local people who live in some of the harshest environments of our planet is equally fascinating and humbling experience, and we are hoping to learn more about their lifestyle in Provideniya, Uelen village and Chukotka.

The last voyage of currently announced 2019 Silver Explorer itineraries will see her travel across Cuba, Colombia, Panama, and Costa Rica. This 17 day journey has many highlights: from riding old American cars across Havana, sampling rum and learning about cigar making, enjoying an evening at the famous Tropicana show, learning about revolution in Santiago de Cuba as well as Cuban music legacy, to crossing Panama canal and meeting Embera people in Darien jungle, to visiting some of the best known national parks of Costa Rica where the emphasis will be on the astounding biodiversity and wildlife encounters. The cost of this voyage starts at GBP 6,900.00* per person based on two sharing. It includes all activities, meals and drinks, butler service and gratuities.

Silver Explorer was the first ship to join Silversea Expeditions fleet in 2008. After an extensive refurbishment in May, 2017, her maximum guest capacity is 144. Each voyage is accompanied by 12-14 expert expedition team and she has a fleet of 12 zodiacs. All Silversea Expedition voyages are all-inclusive: activities ashore, onboard lectures, meals, drinks, butler service, complimentary parka in polar regions, and gratuities are included in the cost of the booking.

*Prices quoted above are based on the prices available on the 23rd of October, 2017. They are subject to availability and change – please contact our reservations team if you would like to find out more.